Peace in the Park Returns Sep 29! 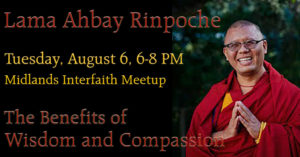 The delightful Rinpoche returns to be with us again, courtesy of the S.C. Dharma Group!

Join friends of any, all and no faiths at Zorba’s Greek Restaurant, 6169 St Andrews Road in Columbia. Free and open to the public. Order on your own.

Ahbay Rinpoche (Lama Ahbay Tulku Jigme Thupten Tendar Rinpoche) is a teacher who has been recognized by the Dalai Lama as a reincarnation of Lama Lobsang Tenzin, and has taught widely in Europe and the United States.

In the present time:  Lama Ahbay Tulku Jigme Thupten Tendar Rinpoche
Born in Darjeeling, India, he became a monk at the age of six. When he was twelve, His Holiness the Dalai Lama identified him as the reincarnation of the hermit Lama Lobsang Tenzin. One year later he was enthroned as Tulku (reincarnation) in Gaden Jangtse Monastery. He was ordained by His Holiness the Dalai Lama. He continues with the work of founding a monastery and teaching all over the world, especially in India, Vietnam, England, and the US.

In a past life: Lama Lobsang Tenzin (former reincarnation of Lama Ahbay Rinpoche)
The former reincarnation of Lama Ahbay Tulku Jigme Thupten Tendar Rinpoche was the hermit Lama Lobsang Tenzin, who became well known and famous for his supernatural powers. By that time animals of the near forest like deer and monkeys would come to him and people from all walks of life continuously received his blessings. After the Chinese invasion, he lived in a room for many years and continued meditating and teaching. Before his death, he predicted his reincarnation.